The archaeological heritage of the North Coast is among the most important in Quebec, with its 1300 listed sites.

The human history of the North Coast goes as far as 9000 years before today. Men, women, children, traders and explorers left traces of their passage and activities, their hopes and beliefs, but mostly, traces of their destiny.

Along the North Coast, several archeological sites testify of this occupation. The sites of L'Anse à la Cave, Île Nue and Middle Bay testify of the passage of Basque fishermen hunting whales in the 1500s. Then, French, English, Jersey islanders, Acadians and even Norwegians came in turn to occupy this vast territory. 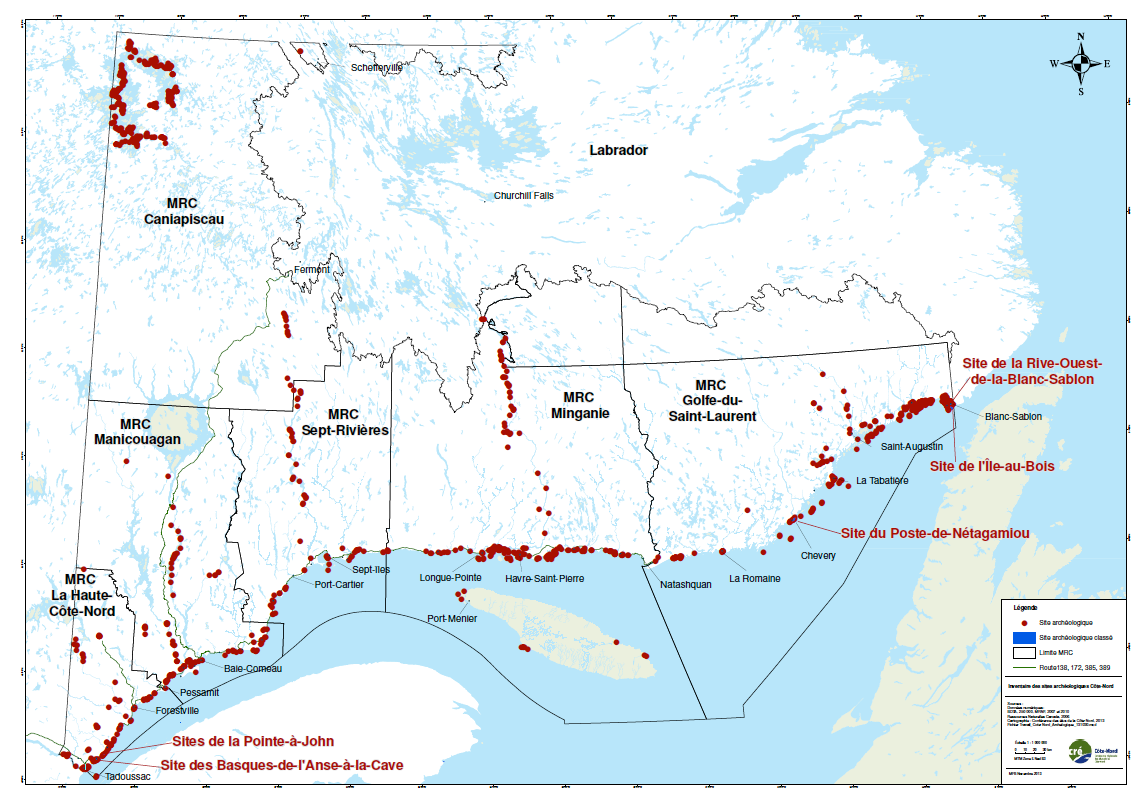 In 1600, a Frenchman, Pierre Chauvin de Tonnetuit, built the first permanent settlement in the new continent in Tadoussac. This trading post lasted until 1859. This rich past is narrated by several archaeological sites, talking about Tadoussac and the first nations at the beginning of the village's history. An important mission led by Jesuits and Oblate Fathers left numerous traces. For example, the sawmill time tells us about a disappeared village once located in the sand Dunes of Tadoussac.
_______________

Located 27 kilometres from Tadoussac, Bergeronnes has three classified sites by the Ministry of Culture: the Lavoie site, the Cliff site and Cave Cove site (Anse-à-la Cave), which is about the Basque presence in the region. For a long time, the oldest site on the North Coast was found in Bergeronnes, with the Cap-de-Bon-Désir site (8500 years before today).
_______________

Forestville and its surroundings

Even if the town of Forestville is young, archaeological sites revealed that Indigenous people had occupied the territory for a very long time. Nearby the town, the Nisula site was discovered in 1991, one of the twelve cave paintings found at the heart of Quebec's Boreal Forest. Norbert's Cove site, located 2 kilometres downstream of Havre Colombier, was a meeting and exchanging point for several First Nations representatives 600 years ago.
_______________

Colonel Mac Cormick was already the owner of the forest concessions of Shelter Bay and Franquelin. He could count on his wood resources to provide paper to the Chicago Tribune newspaper. In 1921, the need in the paper market grew, so he turned his business towards the Manicouagan river, which had huge potential. In 1923, he built a dam on "Rivière-aux-Outardes," and in 1935, a paper factory along with the new city of Baie-Comeau.
_______________

It is easier to navigate safely on the St-Lawrence river today, with all the navigational aids. It used to be much more complex, the river being full of natural traps: fog, currents and shoals, to name a few of the hazards that were and are still encountered. Some authors believe 500 shipwrecks happened on the St-Lawrence River, and more than half on Anticosti's shoals. The shipwreck "Elizabeth and Mary" is Quebec's oldest, found at Baie-Trinité and dated in 1690. Two other incidents are important maritime events, the wreckage of the Corossol and a part of Admiral Hovenden Walker's fleet.
_______________

Located between Baie-Comeau and Havre-Saint-Pierre, the river is 200 kilometres long and takes its source near Labrador's border. The river's surroundings revealed a dozen sites, allowing us to discover many cultural clues, especially in "Grand Portage." A few kilometres long, this section avoids an uncrossable part of the river. Hundreds of people stopped there for 4000 years.
_______________

The First Nations first occupied Sept-Îles until the Europeans rapidly used this location for diverse commercial use. In the 17th century, the establishment of a trading post testified to the fundamental North American activity history: fur trading. In the 19th century, the establishment of the forges on the East coast of the Moisie mouth's river created a village: Saint-Vital-de-Moisie. The "Moisie Iron Company" is the very first to commercially exploit the North Coast's mineral resources. At the beginning of the 20th century, the Norwegians settle a whale factory in Sept-Îles. In 1905, they captured 86 whales from June to October.
_______________

Anticosti lays in the Saint-Lawrence river's hearth and never really attracted archaeologists, even with its rich past. For example, two lobster vessels started operating in 1890, one in Baie-du-Renard. This enterprise allowed locals to work and get financially comfortable until more challenging times in 1895 when a rich chocolate maker bought the isle. Henri Menier dreamed of making it into his hunting and fishing paradise. There is more to know about marking events on this island...
_______________

The Brador site is unique in New France's history. In the 18th century, a great part of the eastern North Coast was divided into concessions: territories rented by New France political authorities to French merchants or civil officers. Augustin Legardeur de Courtemanche's concession, granted in 1704, will make history. Brador Bay is a rich and complex place where many groups of fishermen and operators rubbed elbows (Bretons, Normans, Basques, Spanish and Euro-Canadians.)
_______________

This small island in Blanc-Sablon Bay immediately attracted the first European navigators' eyes, hoping to catch many a fish. Jacques Cartier crossed paths with a Breton crew on his first expedition in 1534. The Breton fishermen are said to be the first to establish a cod treatment facility on the land. They were indeed not the last since there are traces of different chapters in the fish industry in Île-au-Bois.
_______________

Your ticket for the: North Shore’s Archaeology